John 16:13 (CSB) When the Spirit of truth comes, he will guide you into all the truth. For he will not speak on his own, but he will speak whatever he hears. He will also declare to you what is to come.

1 Corinthians 2:10–12 (CSB) Now God has revealed these things to us by the Spirit, since the Spirit searches everything, even the depths of God. 11 For who knows a person’s thoughts except his spirit within him? In the same way, no one knows the thoughts of God except the Spirit of God. 12 Now we have not received the spirit of the world, but the Spirit who comes from God, so that we may understand what has been freely given to us by God.

John 14:26 (CSB) But the Counselor, the Holy Spirit, whom the Father will send in my name, will teach you all things and remind you of everything I have told you.

About ten years ago, around 2010, pop-neo-atheism really became popular. Names like Christopher Hitchens, Richard Dawkins and Sam Harris may have not been household names but their books were hitting best seller lists. And because of the content of their books, that is, “There is no God”, where did you think they were prominently displayed at your local bookstore? Yep, right next to Joel Osteen’s Your Best Life Now and whatever Christian-lite self-help books were rolling out at the time.

I remember that this graphic made its way into Evangelical blogosphere and some discussion was generated from it: 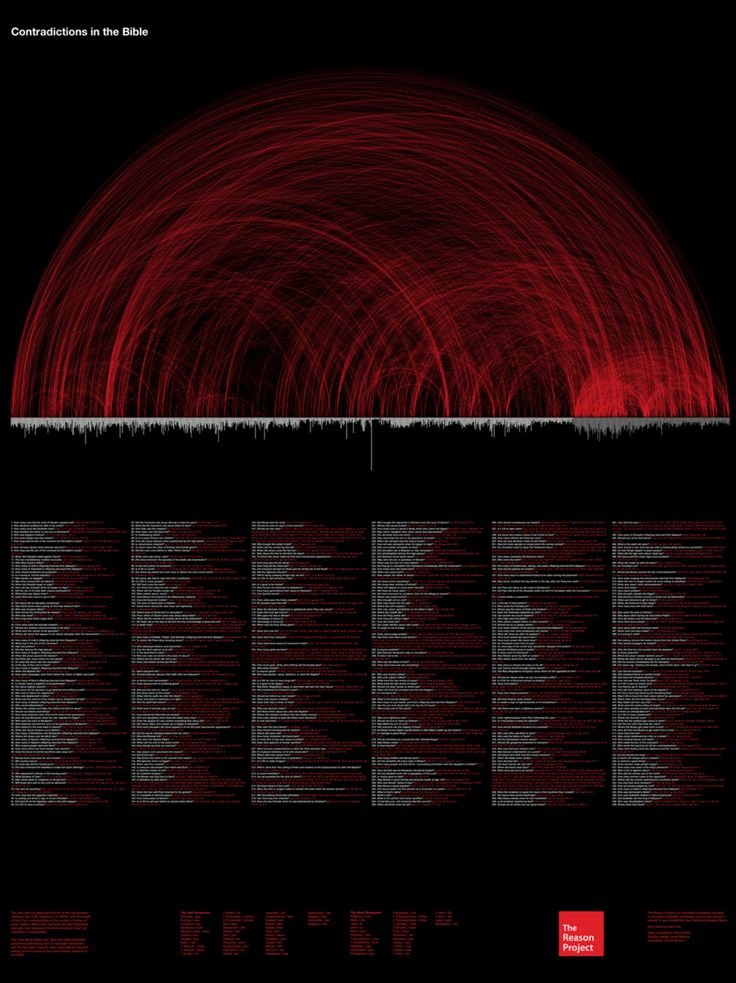 Without taking the painstaking task of diffusing and unraveling each of these apparent contradictions, I was struck at this one thought:

John 5:39 (CSB) You pore over the Scriptures because you think you have eternal life in them, and yet they testify about me.

… and we cannot understand the Bible unless the Spirit of God reveals it.

1 Corinthians 2:12 (CSB) Now we have not received the spirit of the world, but the Spirit who comes from God, so that we may understand what has been freely given to us by God.

Jesus, Son of God who is God, declared that the Scriptures were about him:

Luke 24:25–27 (CSB) He said to them, “How foolish you are, and how slow to believe all that the prophets have spoken! 26 Wasn’t it necessary for the Messiah to suffer these things and enter into his glory?” 27 Then beginning with Moses and all the Prophets, he interpreted for them the things concerning himself in all the Scriptures.

But say you miss that whole point. Fair enough. The 1 Corinthian 2:12 passage should have given pause for thought. That there has to be something outside of us, alien in a sense, that would allow us to understand what this book is about.

Alas, it is difficult for the modern mind to accept the notion that we, humans, are in fact, limited. Most of us believe that if we can put “more” behind our efforts–more science, more technology, more work effort, more study, more emotion–then the possibilities should be limitless.

But there are a couple problems with that, the body, mind, soul, and spirit of the human is not bifurcated nor compartmentalize nor separated but intrinsically and intricately and inseparably woven and connected and overlapping together. What affects the mind affects the heart affects the body that affects the emotions that affects… etc..

Psalms 139:13 (CSB) For it was you who created my inward parts; you knit me together in my mother’s womb.

Two, all of mankind are sons of Adam. That means that we are fallen. A better way of saying that–we are broken. We are broken and we know it and we feel it to our core. What proves this fact that, unless something or someone, outside of us does something, we are truly destined to die. If we were not broken, we would live forever because life was not designed to perish.

If life was broken, then it serves to show that we have broken minds and intellects and hearts and soul. Therefore, we cannot know the depths of our broken. “How deep the rabbit hole goes.”

The outside of us is the supernatural. It is not natural but beyond the natural.

When you, as a mortal man, even arming yourself with your grasp on logic and reason approach something supernatural as natural, you are going to fall short of understanding it.

A pretty graph of Biblical contradictions is task in vanity. It doesn’t accomplish anything and it will fall away into obscurity. What we, as a society, in the Age of Information, is that, in fact, more information is not solving all of our problems–the chief problem is the brokenness of ourselves.

In order for us to understand and live by the word of God, we are wholly dependent on the One whom the Scriptures testify about by the power of the Spirit that the One has sent.

In other words, you will need the Holy Spirit to understand the Bible. Without Him, at his discretion and his good will, the Bible is going to be filled to the brim with stuff that doesn’t make sense. It doesn’t make sense to one who is perishing but only to those who are living:

We may be moved and induced by the testimony of the church of God to an high and reverent esteem of the Holy Scriptures; and the heavenliness of the matter, the efficacy of the doctrine#

Wherever we might be in our theology and doctrine and the sheer academic study of the Scriptures, we stand on the giants of the faith before us. That is the church of Christ before us. Going back to the Christ and his ministry and then going back further to the work of Moses, we know nothing outside the testimony of the Church. All the pastors, all the Apostles, all the Prophets, the Kings, the Priests under the sovereign grace of Christ, who is the head of the church.

We get to know or discover nothing new outside all of our brothers and sisters before us have done.

the majesty of the style, the consent of all the parts, the scope of the whole (which is to give all glory to God), the full discovery it makes of the only way of man’s salvation#

Throw your best arguments and pushbacks against the Bible. Let us say you don’t believe it is supernatural, it is not from God because there is no God. One thing that cannot be denied is the Bible has withstood the test of time.

You might say, “But look at the controversies and the heresies and the abuse running throughout the Church. They are using the same Bible to justify their wicked behavior.” Yet, God, in his same word, has already condemned these wolves and weeds in their place if they choose not to rest in his Son:

And for those controversies and heresies and abuse? They did not win. They did not overcome. They did not conquer. They did not shut down the Church. All the world and hell and Satan and demons could not begin to build their best assault against the kingdom of God. Why? Jesus already brought the kingdom of God here to earth. And it is finished and complete. Now, we, you and me who belong to him, are charged as gospel heralds to proclaim that the good news that Jesus Christ is Lord of all.

and many other incomparable excellencies, and entire perfections thereof, are arguments whereby it doth abundantly evidence itself to be the Word of God#

To the living word of God, there is nothing that compares to it. And it bears witness that Jesus Christ is Lord and God. It is the holder of the gospel–the absolutely power of God in salvation for you and me who believe.

yet notwithstanding, our full persuasion and assurance of the infallible truth, and divine authority thereof, is from the inward work of the Holy Spirit bearing witness by and with the Word in our hearts#

But it is only dependent on God who wills us to understanding and maturity:

Hebrews 5:11–6:3 (CSB) We have a great deal to say about this, and it is difficult to explain, since you have become too lazy to understand. 12 Although by this time you ought to be teachers, you need someone to teach you the basic principles of God’s revelation again. You need milk, not solid food. 13 Now everyone who lives on milk is inexperienced with the message about righteousness, because he is an infant. 14 But solid food is for the mature—for those whose senses have been trained to distinguish between good and evil. 6:1 Therefore, let us leave the elementary teaching about Christ and go on to maturity, not laying again a foundation of repentance from dead works, faith in God, 2 teaching about ritual washings, laying on of hands, the resurrection of the dead, and eternal judgment. 3 And we will do this if God permits.

What can we do? Pray and ask God to mature us and conform us to the image of His Son so that we might see him clearer and clearer every day.

A New Exposition of the London Baptist Confession of Faith of 1689
by Rob Ventura.
Mentor. January 17, 2023.
Amazon

The Baptist Confession of Faith 1689: Or the Second London Confession with Scripture Proofs
by Peter Masters.
Wakeman Trust. January 1, 1981.
Goodreads

The Westminster Confession: The Confession of Faith, The Larger and Shorter Catechism.
Westminster Assembly.
The Directory for the Public Worship of God, with Associated Historical Documents. 2018.
Goodreads